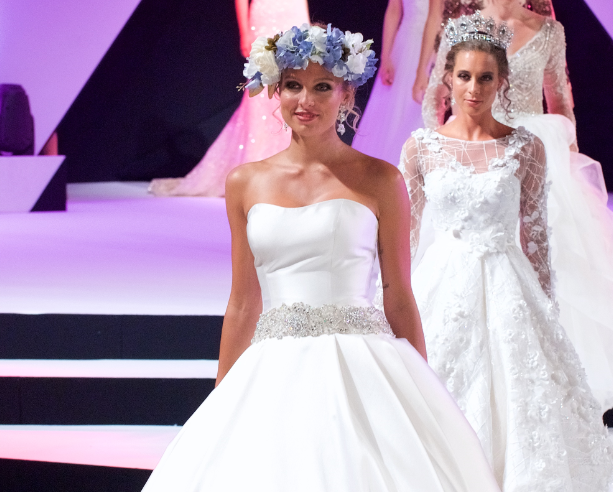 Earlier this month the UK’s largest and longest-running bridal trade show welcomed over 3000 bridal retailers, with the halls buzzing from the opening day of the event, until doors closed three days later. Over 350 collections featured, from a mix of long-established brands and new, independent designers, offering retailers a vast choice of silhouettes, fabrics and price points.  All members of the bridal party were covered, from suits and dresses to shoes and accessories, as well as childrenswear, evening and prom attire and bridal lingerie.

Colour featured heavily, with pastel blue, grey and pink tones dominating eveningwear – seen prominently in the new collections from Angel Forever by Elegancia UK and Veromia. The trend continued through to bridalwear, with pale rose gold, champagne and light blonde tones featuring heavily in the collections from The Story…by Jason Jennings and Jack Sullivan Bridal.
Light-weight, heavily patterned lace and intricately decorative fabrics were the stand out styles from many designers. Le Papillon by Modeca, Besides Couture by Gemy and Bianco Evento all featured inspiring gowns with complex lace detailing, some with a boho-style simplicity. Laser-cut 3D embroidery remained prominent with floral detailing seen in Casablanca Bridals and Demetrios’ collections.

Sleeves remained in focus – everything from illusion, seen in Mark Lesley’s 2018 collection, to full length and statement. Embellished cap sleeves were a big part of Sottero & Midgley’s collection, while shoulder-baring, boho-style sleeves were a prominent part of Brides Desire by Wendy Sullivan’s 2018 offering. Crepe long sleeves were significant for Justin Alexander and Pollardi.

As for menswear, tweed remained in style while beautiful Asian silks dominated the jackets and waistcoats, as seen in the collection from Wilvorst. More elaborate ties and pocket squares showcased how male bridal fashion is moving into the spotlight, with the collection from Knightsbridge Neckwear and L. A. Smith providing vivid colours and impressive fabric choices.

On the Monday night after the show, the annual Bridal Buyer Awards brought the industry together to celebrate bridal successes. Almost 600 esteemed guests attended the event, hosted by Anna Morris, the comedian behind the viral web blog series, Georgina the Bride.

Harrogate once again proved itself to be an essential part of the industry calendar, both for the designers showing their latest collections and for the retailers sourcing them.